My previous post on trauma was written in the way I usually write; by simply allowing my fingers to do their thing on the keyboard without censorship. At the time I felt ok about what had come out, like I had some kind of resolution and a ‘next step’ to take. Well, I took that next step last week – I went to see my psychologist. I feel … I don’t know, really.

We talked about things for a bit, I caught her up with what’s been happening in my life and then she tells me what she thought of my post on trauma. Great insight, until she got to the dot points. Then it was “you don’t want to own your trauma”. At that point I looked at her with puzzlement. How could a series of dot points mean I don’t want to own it? I thought I was doing a quick summary so I could use the list as a reminder to speak with her about it.

And then her explanation hit a nerve. Big time. I find it so easy to support other people through their stuff, to help them confront the tough, traumatic things in their lives. I ask the tough questions and it gets emotional and messy and uncomfortable and scary. And I don’t want that. I don’t want to go there for myself. It hurts. The thing is, I don’t have to do anything with my trauma. I don’t have to respond in a certain way. I can allow it to be there, to sit with me, to accept that it’s mine. To accept that is a part of my past. That it’s there and it’s not going anywhere. I keep asking the question about how I can do things like that. How can I deal with this, how can I deal with that? The question is, how can one do anything with something like this kind of trauma? Trauma that has been an insidious part of your life for a long time and has not been acknowledged until recently. Trauma that has put a load of stress on your system that you have essentially ignored for 30+ years. What can you do, really?

I think one of my main issues has been allowing my emotions to sit with me. I’ve always hidden them, turned away from them and avoided them. It’s become a long time coping mechanism to hide from them so much that I don’t realise they are there. I’ve been working on being more aware of them, allowing them to surface naturally. And not being afraid of them.

It’s certainly a process! One that I don’t have a clue how to do. And that is upsetting. I guess a big part of everything I have worked on in the last 2 years has been to deal with and recognise emotions I never have before. And I have come to this point, where I can recognise that there are issues.

I am unsure what to do. The prospect of “owning” that trauma fills me with anxiety. There is so much of it sitting there and I truly don’t want it. If I take it I worry that it will totally swamp me. If I were working with someone else I’d encourage them to do it slowly and to take small steps. My mind is going a little nuts with it. 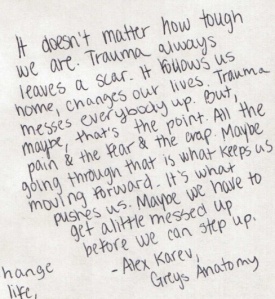 Things I hear and read

The Mindset Effect
Can Anybody Hear Me?

A Caregivers Blog About Love, Care and Commitment

My journey from addiction to health..

More Than Mum
Loving My DID Girl(s)

I am breaking my silence and sharing my journey. You are the expert on your journey of living fully with PTSD, you just need to find your inner wisdom and trust it.

pieces of me
Lisa Jane

Journey to Fit
Real learning, for a change
Susan Korsnick

Pure You: Art and Soul

Mother, wife and HELLP syndrome survivor: How all of that catapulted me back to what I should have been doing all along.